The parti sapphire is the perfect motif for the new world that prioritises artisanal labour and conscious consumption. Not to mention, it’s the next big ‘It’ trend in the gemstone market at the moment

Parti sapphires have emerged as the most coveted gemstones in the modern luxury market. The bi-cloured or tri-coloured sapphires effortlessly feature more than one primary colour within them. In 2022, as the market readies itself for the season of aesthetic-minded buying trends in high jewellery, parti sapphires come across as the ultimate winner. Its natural beauty and light performance can be enhanced by precise and skilful gem cutting and as investment-worthy pieces or even collector’s picks, they simply offer more than diamonds.

There are many reasons why you should be among the first movers in the parti sapphire boom. But before you add some heavy-weight sparkle to your cart, consider reading up on the basic aspects of these unique sapphires.

What are parti sapphires?

Parti sapphires (often referred polychrome sapphires) show more than one colour in a single stone. Parti sapphires have a distinct colour zoning (usually related to the growth of crystal layers), which appears as a cluster of concentric hexagons. Parti sapphires with a prominent violet zone and tri-colour parti sapphires are rare and thus, quite sought-after. Their unique colouration aside, their cut can be crucial for their light performance since the angles can determine which zone shines through. This buyer’s guide has some more pointers.

Moreover, no parti sapphires are alike. This means skilled gem-cutting can bring out a truly unique vibrancy in parti sapphires. This makes parti sapphires the most desired engagement stone, even more than other teal variants. And with a 9 on the MOH scale (MOH measures hardness), it comes second-in-line after diamonds, considering their exceptional durability. If you’re considering wholesale options, explore here.

Parti sapphires also make great modern heirlooms, given their antique connect. In the Edwardian era, two-tone parti sapphires, featuring a green or yellow strike through a blue gemstone, were in demand. They made for the most appealing centre stone which made them a popular pick for wedding rings. Modern buyers too consider parti to be a prime choice for commissioning bespoke pieces.

If you’re working with a wholesale platform to source your sapphires, it’d be easier for you to curate the gemstones from their line-up. If you’re using stones from inherited jewels (a royalty-approved idea for designing your own, sentimental engagement ring) to commission wedding jewellery, consider adding interesting coloured gemstones as accent stones.

How are parti sapphires formed?

Parti sapphires are often called bi-colour because some variants show two colours, while others will offer all three and thus exude an almost kaleidoscopic effect. However, it’s important to note that, unlike colour change sapphires, parti sapphires do not change colour, they simply exhibit different colours in different angles.

Sapphire is a member of the corundum mineral species. Corundum forms deep in the earth and different trace minerals infiltrate the crystal structure in certain areas. In teal parti sapphires, the corundum reacts with the surrounding iron and titanium. These trace minerals create pockets with different colours, usually green, blue, and/or yellow. Usually, the brighter the colour zones, the higher the price per carat.

If you’re buying your own gemstones, remember partis usually sparkle in blues and yellows. In fact, the most coveted parti variant is a blue crystal with a visible yellow core and it’s called Pharaoh’s Eye (more on this later).

Why are Australian parti sapphire special?

Australia, Kenya, and the state of Montana in the United States are the primary sources of parti sapphires. For a few decades now, Australia has been a major player in the mining and production of parti sapphires all over the world. In the ‘70s, with the advent of mechanised mining, the Australian sapphire mining industry saw a steady boom.

Australian sapphires are associated with volcanic activity which is also why they are called ‘basalt-hosted.’ Because of the higher deposits of iron, the blue is often darker in Australian sapphires. And there’s usually a visible green pleochroic element which plays up the contrast in parti stones.

In the past few years, Australian parti sapphires experienced a steady boom in the global wholesale market as its visual and aesthetic merits were re-considered by gemologists and also the mainstream market. Research states that Australian sapphires account for over 70 per cent of the world’s blue sapphire production.

In Australian sapphires, it’s the intensity of the stone that sets it apart from other variants and balanced tonalities are preferred because too dark a stone will make the colour zoning difficult to detect.

Moreover, sapphire mining in Australia is governed by strong legislation. So ethically mined sapphires from Australia have naturally found many takers in the modern luxury market, since conscious buying has ramped up its significance. Your best bet to buy ethically sourced parti sapphires is to choose a platform that prioritises traceability, which is crucial for wholesale buyers.

Are partis the best kind of teal sapphires

Blue corundum is the most common naturally occurring colour. In Greek, the meaning of the word ‘sappheiros’ translates as blue stone. For the longest time, most Anglican aristocracies considered sapphires to be a prized gem as they were associated with blue-bloodedness.

Parti actually stands for partition, which means the colours are sectioned into distinct colour zoning bands. In the gemstone market, the most desired precious teal sapphires have an equal or near-equal combination of two primary colours. The most valuable variant of teal sapphire has a 50-50 blue and green composition, known as mermaid sapphires.

Parti on the other hand often has hints of yellow, which depend on the reflection of light and the cut. Colour science aside, while mermaid teal sapphires have been traditionally preferred by most, parti sapphires are only just getting recognised owing to their unique features.

There’s no denying that mermaid sapphire ais all about symmetry. But parti sapphires on the other hand promise something more exciting and curatable, since so much depends on the kind of natural-occurring gemstone you can spot in the market. The intensity of the stone is a great marker for grading partis. Well-saturated parti sapphires, with at least one vivid primary colour, is usually considered a prized pick.

What is Pharaoh’s eye?

The Pharaoh’s Eye in teal sapphires is a terrifically sought-after feature, especially by collectors and wedding ring shoppers. In sapphires, each inclusion opens up different visual aspects for each variant. In Australian parti sapphires, a Pharaoh’s eye is a naturally occurring rarity in Australia where a yellow core is surrounded by blue or green. The colour pooling at the centre of the stone is what offers this grade of parti an astonishing sparkle and light performance. It’s also a marker that the sapphire is completely untreated. Cut in the brilliant-cut round form, parti sapphires can exude a gorgeous sparkle that spotlights the yellow pupil as well as the facets in the contrast.

Your best bet to source an authentic and ethically mined Pharao’s eye parti sapphire is via a trusted wholesale platform where you can be sure about authenticity and traceability. Find some more clarity on Pharaoh’s Eye here.

What are the best cuts for parti?

The plays a crucial role in situating the colour zoning. In fact, if you’re sourcing your gemstones first or working with a wholesale platform, make sure you’re specific about what you want from a parti’s light performance, without affecting its carat weight. Since no two parti stones are alike, buyers of this stone are already at an advantage. While a brilliant, round-cut is expected to suit most parti sapphires, be aware of where you want your colour partition in your stone, especially in tri-colour sapphires which are rare and thus valued somewhat highly. Angular cuts can do wonders to boost the symmetry of parti sapphires.

In the post-pandemic market, high jewellery has experienced a dramatic shift. Luxury buyers are not necessarily looking for traditional, safe or conventional opinions. Parti sapphires represent this new wave of fashion buying on many counts. The perfect parti is a balance of nature’s bounty and precise cutting. For buyers who value artisanal production and are keen about the environment, this is a win-win.

Parti sapphires are innately wearable and their dynamism is counteracted by their moody intensity since their dark-ish hues make the gemstone pairable with almost anything, be it rose gold or white gold. For the conscious buyers, ethically mined Australian parti sapphire would be the ultimate pick as an engagement stone even for modern heirloom pieces, considering their overall aesthetic value. 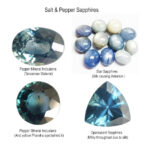 Previous Post What Are Salt And Pepper Sapphires And Why Are Buyers Obsessing Over This Previously Disregarded Variant? 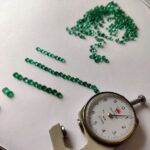