Mystic Topaz – One Of The Classic and Unique Semi Precious Gemstones

Mystic Topaz is one of the most competitive gemstones for Navneet Gems and Minerals. We make sure we are the lowest cost producer and at the same time produce the highest quality possible of gemstones. Mystic Topaz has been a gemstone of the century. It has been used in designer jewelry and much of the Topaz Jewelry is sold in the USA.

This Topaz is a rainbow-colored gemstone that is quite beautiful. However, the different shades of color produce gleaming rays and as so create a magnificent effect. The name of the stone “Topaz” is derived from an island named “Topazos” that is located near the Red Sea.

Most of the gemstone buyers considered Mystic Topaz and Mystic Quartz a lot similar, but they are completely different from each other. For example, the base material is White Topaz in Mystic Topaz while the base material is White Crystal Quartz in Mystic Quartz. The hardness of topaz (7 on the Mohs scale) is higher than Mystic Quartz (5 on the Mohs scale of hardness) and so it’s easier to coat it. Besides, Topaz is more expensive than Crystal Quartz.

Do you know that a large number of people of America buy these gems because of the beautiful coating Topaz gives out? Irradiated Blue Topaz sold in the USA has been imported from other countries in recent years, and so has Mystic Topaz. The colored gemstone business at wholesale is making Mystic Topaz one of America’s most popular gemstones. Utah State in the U.S. has made Topaz the official stone of the state. 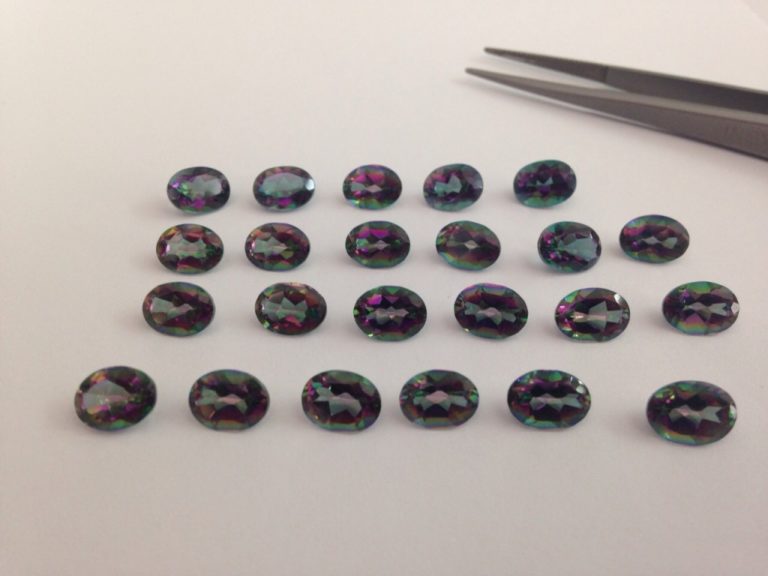 A photo from the stock of our Mystic Topaz Gemstones

Where Does Mystic Topaz Come From?

Mystic Topaz is an enhanced gemstone which means it does not form naturally. This semi-precious gem is mined in Africa & Brazil.

What sets Mystic Topaz apart from other stones? That is its very appealing rainbow color that changes as it is tilted. The quality of this gem is dependent on the quality of the raw material. So, Topaz gems with high luster and clarity will provide the best results. This colorful gem is unnaturally treated to create its rainbow effects using film deposition and this process involves bonding a very thin metallic film layer over the top of the stone so that the attractive color effects are reflected from the crown.

Navneet Gems & Minerals is a Thailand-based gemstone manufacturing company of both precious and semi-precious gemstones. The company is making different colors of Mystic Topaz, including yellow, blue and golden. The company makes semi precious stones and our Mystic Topaz factory has the capacity to produce over 100,000 gemstone pcs per week.

The process of the Mystic Topaz of the company is that they take 100% clean White Topaz production from our own factory located in Thailand and then coat these stones with Mystic Coating in a factory that is situated in China with skilled labor. The process is also known as Chemical Vapor Deposition (CVD) Coating that is a different coating process than the PVD vacuum process of vacuum evaporation, sputtering, or plating.

Primarily, Mystic Topaz is used for decorative jewelry and rings are one of the top jewelry items to find this stone in, which makes it the best for any type of ring. In reality, many people are picking this stone for an engagement ring, due to its beauty and style.

The price of the gemstone is growing at a rapid rate, but the demand for them has not gone down. Also, people in all countries of the world are buying Mystic Topaz. Remember, the price of a Topaz varies along with the carat size, so the larger the size of the topaz, the higher will be the price. Usually, prices of Mystic topaz start from 0.50$/carat up to 1$/carat, depending on sizes, shapes, and quantities.

Please get in touch with us if you are looking to buy any Mystic Topaz for your collection or your jewelry manufacturing.  Contact Us Here to order or inquire about buying yours today.