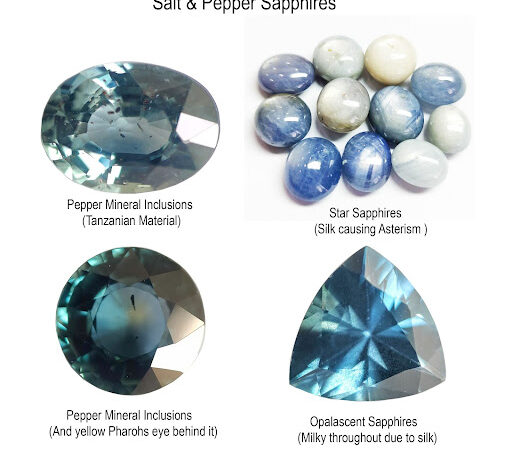 What Are Salt And Pepper Sapphires And Why Are Buyers Obsessing Over This Previously Disregarded Variant?

They were once wasted and considered undesirable but in the post-pandemic market, the salt and pepper sapphire is emerging as the dark horse. Here’s why:

In the post-pandemic market, mindful consumption rules the idea of luxury. Even when it comes to major, investment-worthy gemstone purchases, buyers prioritise consciously produced options that have been ethically sourced and can be traced back to a non-toxic mine-to-market chain.

In the gemstone circuit, trends are currently being dominated by the durability and utility of a gemstone and not just the carat size or clarity. Since sustainability is more relevant than ever, non-traditional options that have previously been wasted or disregarded, are re-emerging in the mainstream market. This change has occurred because customers are keen on giving back to nature, without exhausting natural resources.

This explains the popularity of salt and pepper sapphires perfectly. These previously disregarded variants of sapphires are non-traditional but are known for their unique inclusions. However, what has so long been treated as an undesirable trait or an imperfection is making them coveted in the current gemstone market. But what really are salt and pepper sapphires? And how can you buy them?

Before we explore what salt and pepper sapphires really are, it’s important to understand the role of inclusions in sapphires. Sapphires host many different inclusions, and even the best natural sapphires feature some form of inclusions. The ideal clarity grade for sapphires is eye-clean, which refers to no visible imperfections; these are sapphires whose inclusions can only be detected upon magnification or expert scrutiny.

Sapphire’s inclusions occur naturally and may vary depending upon their origin. Distinct inclusions are preferable since they are more refined. They help set the sapphire apart, hence ramping up their allure. Now that buyers are prioritising other factors over clarity and carat, the salt and pepper sapphire has found its footing, owing to their unique contrast in inclusions.

Think about galaxy salt and pepper diamonds, which are the trendiest pick in the modern gemstone circuit. These rare starry diamonds are full of black and white inclusions or specks that darken their appearance, giving them an inky finish. These alternative diamonds have garnered a lot of popularity owing to their unusual colouring and one-of-a-kind natural monochromatic markings which make it a visual masterpiece.

In salt and pepper sapphires, the inclusions depict a lot about their growth and also about where they grew. To modern buyers who value traceability, this is a coveted aspect. Not to mention, there are aspects like zoning and gentle imperfections which may actually escalate the value of a gemstone, making them perfect specimens. To be brief, inclusions bring the promise of authenticity. They prove that gemstones aren’t synthetic or treated and hence, inclusion-focused variants are emerging as top-sellers in the modern gemstone market, which prioritises transparency. Distinct, defined inclusions are ideal and coveted.

In the past couple of years, salt and pepper sapphires have come to represent ethical and responsible consumption. The thing is, owing to their inclusions, salt and pepper sapphires had largely been ignored or discarded, even by wholesalers. Modern buyers, however, are steadily recognising the value of giving back to nature. Hence, previously overlooked variants are being seen for their real value, bringing about a sea change in the common valuation of gemstones.

So, what are salt and pepper sapphires?

Salt and pepper sapphires have some mineral inclusions that come from salt (white silk mostly)and pepper (usually mica). Inclusions including minerals such as hematite, zircon and mica are common. Some inclusions are unique to particular gemstones or to a selection of minerals, such as rutile needles. Unheated sapphires that have rutile silk throughout the stone and yet retain their transparency are referred to as opalescent sapphires. These refer to sapphires that feature an opal-like (and often prismatic) translucency.

It’s important to notice that inclusions in salt and pepper sapphires and imperfections, in general, indicate an original source, which can be a USP in selling a gemstone. For example, Brazilian Paraiba tourmalines often have copper inclusions, which are not found in other tourmalines. Similarly, Sri Lankan spinel contains zircon crystals. These become their defining features and makes them stand out. For instance, in some teal salt and pepper sapphires with pepper mineral inclusions, you’ll spot a Pharaoh’s eye. This feature is usually a naturally occurring rarity in Australian parti sapphires where a slightly yellow crystal core is visible to the naked eye.

Tanzania is considered to have a lot of potential as a future mining hub as the Tanzanian government is actively involved in cultivating a sustainable future for its gemstone industry. There are a range of coloured stone deposits in Tanzania that has renewed global interest in Tanzanian mining since it can cater to an ethical mine-to-market chain.

the sapphire). However, salt and pepper sapphires are mined all across the world. For instance, Australia is a hub for parti sapphires which are known as polychrome sapphires and feature more than one solid colour. Salt and pepper inclusions make these kinds of teal sapphires a lot more interesting, visually.

Sri Lanka is also a good source of these opalescent sapphires. Sri Lanka produces top-quality cornflower to Ceylon blue sapphires, which have been trending for the past year. Unheated Ceylon sapphires offer optimal colour performance and vibrant medium blue hues which let the inclusions shine.

Why choose salt and pepper sapphires?

In the last two years, buying priorities changed for the modern consumer. In the gemstone market, buyers are aiming towards aspirational (but wearable) carat sizes and alternative gemstones. Trend reports suggest that the commercial popularity of the eclectic, complex, notes of blue-coloured gemstones are in demand.

Moreover, conscious buying is booming in all circuits. Buyers don’t mind spending as long as they are certain that they were going for mindful and ethical products. Salt and pepper sapphires have long been disregarded as ‘undesirable’ owing to their inclusions which were deemed ‘flaws’. Up until a few years ago, they were thrown back to the dump yards since eye-clean sapphires were considered to be more valuable. However, it’s only with the rise of conscious buying that non-traditional options found their niche in the market. People are now ready to look beyond inclusion-free gemstones and consider natural, unheated stones that are ‘imperfect’ but represent the best aspects of nature.

Naturally, the salt and pepper sapphire emerged as the dark horse in the post-pandemic market when modern buyers connected it to the idea of giving back to earth and ethical sourcing.

What’s in and what’s out:

Underrated gemstones or offbeat colours are trending. However, durability and hardness also matter when people are scouting engagement stones or thinking of commissioning pieces because not all gemstones aren’t fit for daily usage. “Some gemstones are more delicate and will need to be worn with more care to ensure they are not damaged. Choose a gemstone that will have the durability that fits your day-to-day activities,” jewellery designer Collen Montage says.

This is exactly why sapphires make for such brilliant options for investment-worthy jewellery. They rank 9 on the Mohs hardness scale and are incredibly durable. Not to mention non-diamond alternatives stand out from classic, monochrome diamond variants. So emerging trends are revolving not around carat sizes but around depths of colour and cut.

Moreover, clean teal sapphires are rare. If you’re zeroed in on a trusted wholesaler or a gemstone platform, they can promise traceability and can guide you through your purchase journey. For instance, Navneet Gems is a leader in Tanzanian salt and pepper sapphires. The company is one of the biggest wholesale suppliers of gemstones and offers a large variety of blue-ish gemstones sourced from around the world.

A trusted resource will also offer some insight into the origin and production of your gemstone and help you find the kind of colouration you’re aiming for. When it comes to salt and pepper sapphires or any niche options, that are rare to source, it’s always recommended to work with a reliable source that can promise transparency.

The emergence of salt and pepper sapphires has opened up strains of discussions in the collector’s circuit, vis-a-vis market priorities and changing patterns. Buyers who are looking for engagement rings are steadily steering towards alternative options, be it offbeat colours, new-wave cuts or something that’s mindful and different. For retail platforms or jewellery brands, stocking up on salt and pepper sapphires and opalescent picks became rather crucial since there was clear consumer demand for it. 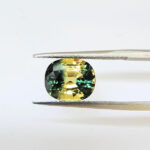 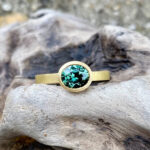