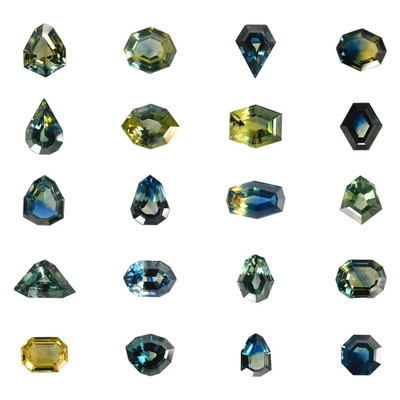 What Are Parti Sapphires:

Also known as polychrome sapphires, parti sapphires are made of a natural blend between two colors, yellow and green. Just like all sapphires, parti sapphires belong to the corundum family and therefore come with all the associated physical properties that make them so valuable. Parti sapphires contain impurities like iron and titanium that give them their characteristic color. Iron imparts a yellow or yellowish-brown color whereas blue areas have a higher concentration of titanium and less iron. Green is created by the presence of both titanium and higher traces of iron than seen in the blue coloration.

While many sapphires have the same color composition, parti sapphires are different because of the presence of distinct bands of color. This is known as color zoning. This means that unlike dual-toned stones like teal sapphires the two colors have a distinct band of separation that doesn’t allow the merging or blending of one color into the other.

We believe the right picture can lower the expectation and get better satisfaction for customers when they get such stones. The same goes with these parti teal sapphires – sometimes our customers ask us do you do better quality than this?

We at Navneet Gems work with all shades of teal and parti sapphires. From bright Parti’s to Mermaid sapphires ©️ to deep Teal sapphires.

Wholesale parti sapphires are one of the most lucrative investments that can be made in colored stones. Their growing popularity and their availability in a single piece ensure that the customer’s interest is always held on this stone. Not only does it provide an attractive alternate option as parti sapphire engagement rings, but loose parti sapphires can also be used to offset a white diamond or any other center stone.

Here, You Can Check: A Buyer’s Guide To Parti Sapphires