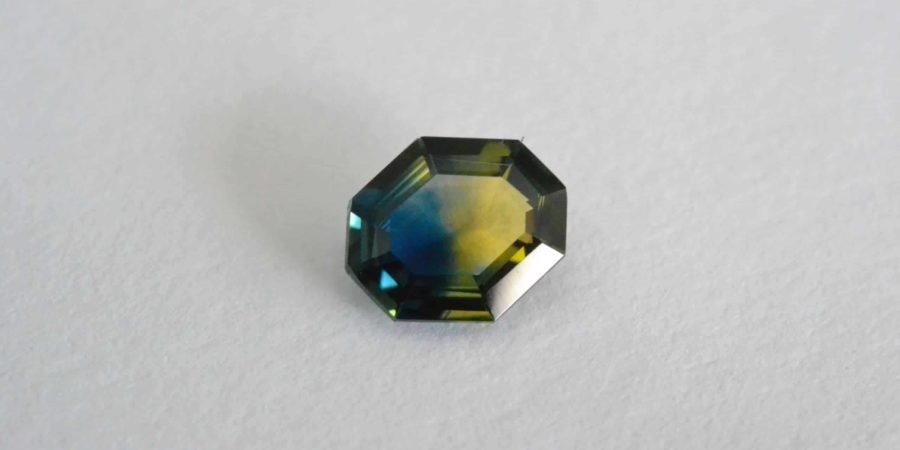 A Buyer’s Guide To Parti Sapphires

While these inimitable stones have been around for a while, parti sapphires have only recently begun to grab the public eye due to their unique color. It can be said without qualms that absolutely no two parti-sapphires are alike. These beautiful stones are not just a testimony to nature’s brilliance but also test a cutter’s skill in bringing out the best in this gemstone.

A unique array of parti sapphires cut and finished by Navneet Gems and Minerals.

WHAT ARE PARTI SAPPHIRES:

Also known as polychrome sapphires, parti sapphires are made of a natural blend between two colors, generally yellow and green. Just like all sapphires, parti sapphires belong to the corundum family and therefore come with all the associated physical properties that make them so valuable. Parti sapphires contain impurities like iron and titanium that give them their characteristic color. Iron imparts a yellow or yellowish-brown color whereas blue areas have a higher concentration of titanium and less iron. Green is created by the presence of both titanium and higher traces of iron than seen in the blue coloration.

While many sapphires have the same color composition, parti sapphires are different because of the presence of distinct bands of color that is called color zoning. This means that unlike dual-toned stones like teal sapphires, the two colors have a distinct band of separation that doesn’t allow the merging or blending of one color into the other.

THE SCIENCE OF PARTI-SAPPHIRE COLORS:

Gemological science is intimately associated with the color theory, which makes sense as colored gemstones primarily hold their value based on their unique coloring. With yellow and green being the primary colors in most parti sapphires, let us explore the phenomenon leading to the formation of these colors.

On the visible spectrum, green is the color between blue and yellow and is perceived at a wavelength of 495-570nm. Interestingly, the sensitivity of the dark-adapted human eye is greatest at 507nm which is the blue-green color, while the light-adapted eye is sensitive at 555nm which is the yellow-green region. Therefore, at all times the light and dark receptors in our eyes are stimulated to perceive the color green most favorably. This is an important fact to note, as it makes green the most palatable color to our eyes. 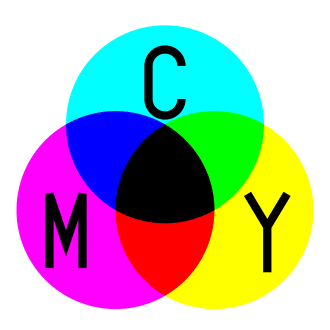 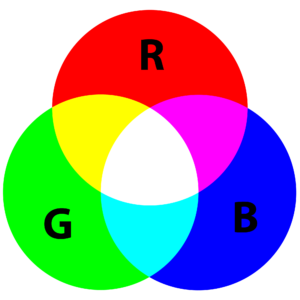 Yellow lies between orange and green on the visible light spectrum and has a wavelength of 570-590nm. In the subtractive color system it is a primary color whereas, in the additive color system, it is a combination of red and green projected at the same intensity.

WHAT CAUSES COLORS IN GEMSTONES:

The color we see in a colored gemstone is the result of the absorption of various wavelengths of the original white light. Gemstones can either be allochromatic,i.e, the color can be caused due to the presence of impurities, or idiochromatic, i.e., due to their own chemical composition. Selective absorption of light in both these types of stones is due to the presence of transition elements like Iron, Titanium, Vanadium chromium, etc. Each of these elements behaves differently in the presence of light, allowing and absorbing only certain wavelengths of white light. This is turn gives rise to the 3 pillars of color appraisal: Hue, Tone, and Saturation. So let’s explore these concerning parti-sapphires.

The tone essentially describes how light or dark the stone is. In other words, it is the intensity of the stone. For parti sapphires, as with all sapphires, it is important to remain in the medium tone range as too dark a stone will make the color zoning imperceptible and too light a tone will dilute and wash out the colors of the stone.

The saturation describes the vivacity of a stone which can be described anywhere between dull and weak and vivid and vibrant. The brighter the color zones, the higher the price per carat. Both wholesalers and retailers of parti sapphires are advised to invest in vividly saturated parti sapphires, or parti sapphires with at least one vivid color to increase their aesthetic value.

The origins of these stones are as exotic as their appearance. Technically,  both whole parti sapphire and single-piece larger parti sapphire can be found wherever sapphire is mined, including India, Ceylon (Sri Lanka), Burma (Myanmar), Australia, Brazil, Thailand, and Vietnam. The Montana sapphire in particular is renowned for its dramatic parti-color varieties. Amongst African sources, Kenya is one of the most important sources, producing exquisite parti sapphires of both perfect wholesaler and retailer quality. One of the most significant suppliers of parti-sapphires is Australia as it produces large quantities of yellow sapphires through mechanized mining.

The first teal sapphires were discovered in Montana along with the parti sapphire. While there was some confusion regarding these two because of the similar color combination, the color zoning soon made the distinction evident. With Montana being one of the first mines to undertake legal, ethical mining, parti sapphires sourced from here are valued for being ethically mined. The Montana sapphire has more fire and brilliance in the stone than its other counterparts.

Africa has been one of the readiest sources of gemstones. One of the most valued parti sapphire specimens is from Kenya. Kenyan parti sapphires have a distinct green color and are more green than yellow. This sets them apart in quality. However, with Africa’s history of strife with gemstone mining, it is always advisable to get the source verified before purchase.

Both these bicolored gemstones, parti sapphires, and teal sapphires, have peaked in the last few years, thanks to the dissociation in interest from conventional white diamonds. With more and more customers looking for uniquely colored stones on a reasonable budget, the focus of gemstone wholesalers and retailers should shift towards poster generation of stones like parti sapphires and teal sapphires.

Note the absence of a partition line in the teal sapphire (Above), which doesn’t break up the two colors, whereas, in the parti sapphire (Below), the two colors are distinctly separated in the center. Photo Courtesy: Navneet Gems and Minerals

However, as professionals, it is critical to understand the difference between the sources. This becomes increasingly important as they usually have the same mining source, and many specimens look very similar due to the same basic color composition of yellow, blue, and green. However, it is critical to remember that parti sapphires have a distinct color zoning whereas in teal sapphires the color crystals are intermeshed which do not present as distinctly different zones to the eye. An easy way to remember this is that parti sapphires are not color-changing sapphires.

This means that, unlike teal sapphires, parti sapphires aren’t going to look like a completely different color in different lighting conditions. These gemstones will have a different color in different regions of the stone, depending on the partition, which is generally placed at the center of the stone by cutters for a more dramatic and obvious effect. The point to be noted is that all these zones will display the same color in every kind of light. Can’t fault this beauty on the consistency front!

While bicolored and parti gemstones have been keenly collected by mineral connoisseurs traditionally, these gems are highly sought after today for stunning statement pieces and alternative engagement rings. To generate interest, the customer must find a romance and intrigue that is intimate to the alluring colors of the stone. Here are a few ways to pitch parti sapphires.

The multitude of unique shades is the first thing that makes a client stop and takes a look at a parti sapphire once more.

2. OTHER PROPERTIES OF SAPPHIRES:

As parti sapphires belong to the family of sapphires, they exhibit all the physical properties of sapphires that make them valuable. They have a high hardness value of 8.5 to 9 which is second only to that of a diamond. This makes them scratch-resistant and perfect for everyday wear.

What better signifies the union of two souls than a stone that unites two distinct colors as one! These stunning bi-colored gemstones not only combine the two distinct symbolism of two colors of sapphires, which are usually yellow and green but also blue or violet occasionally but also have the symbolism of their own. This makes them the perfect vessel to signify matrimonial ties.
Parti sapphires are also considered the birthstone of September month, making them the perfect gift for September babies.

COST OF THE PARTI SAPPHIRE:

In the current scenario, when parti sapphires are just gaining their footing in the market, these are some of the most reasonably priced stones when compared to conventionally popular sapphires like the cornflower blue sapphire, the Padparadscha sapphires, the pink sapphires, and more. This makes them highly palatable to a younger crowd who are looking for sustainable, budget-friendly but unique options. The parti sapphire engagement ring market is quickly catching on as, as a customer, it is virtually impossible to tear your eyes away from something as spectacular as this gemstone.

*(Please note that the above-stated prices are average representations and vary from seller to seller.)

Wholesale parti sapphires are one of the most lucrative investments that can be made in colored stones right. Their growing popularity and their availability in a single piece ensure that the customer’s interest is always held on this stone. Not only does it provide an attractive alternate option as parti sapphire engagement rings, but loose parti sapphires can also be used to offset a white diamond or any other center stone. Just like teal sapphires, most sources of parti-sapphires are verifiable, like the Australian parti sapphire,  which makes them very palatable to the ethically minded customer. We highly recommend readers understand this beautiful stone more and look into avenues of investing in them. 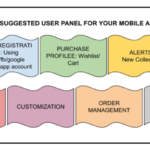 Previous Post Mobile Applications To Enhance For Your Jewellery Business. 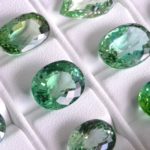