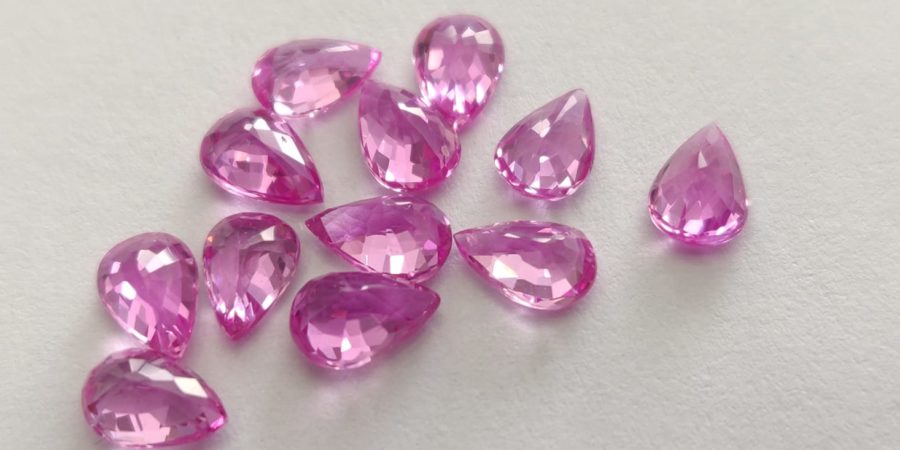 The Rainbow range of sapphires available at Navneet Gems and Minerals

1. The history of pink sapphires:

Pink sapphires have experienced immense popularity since ages. One of the biggest markets of wholesale pink sapphires was Japan till the late 20th century as the Japanese believed that pink sapphires brought good luck and were a symbol of true love. However, at the turn of the century, pink sapphires lost some of their popularity with the increase in the import of other colored stones and white diamonds.

While the Japanese and associated South East Asian market still believe in the astrological powers of pink sapphires and heavily invest in them, the Western world has not been exempt from its charms. Celebrities like Margot Robbie, Lady Gaga, Jennifer Lopez, and more have been spotted sporting striking pink sapphire pieces couples with white diamonds rose gold metal, and platinum. With Coral pink being the color of the year in 2019, pink sapphires with orangish hues like the Padparadscha sapphires have made a splash in the gemstone market.

Price-wise, the richer the color, the more is the cost. So a pale pastel pink sapphire would cost much less than a vivid magenta pink sapphire. However, the choice of a pink sapphire should not be made based on that and should be a personal choice solely. White sapphires don’t exactly have a clearly demarcated classification, they can be differentiated based on subtle differences in their color. 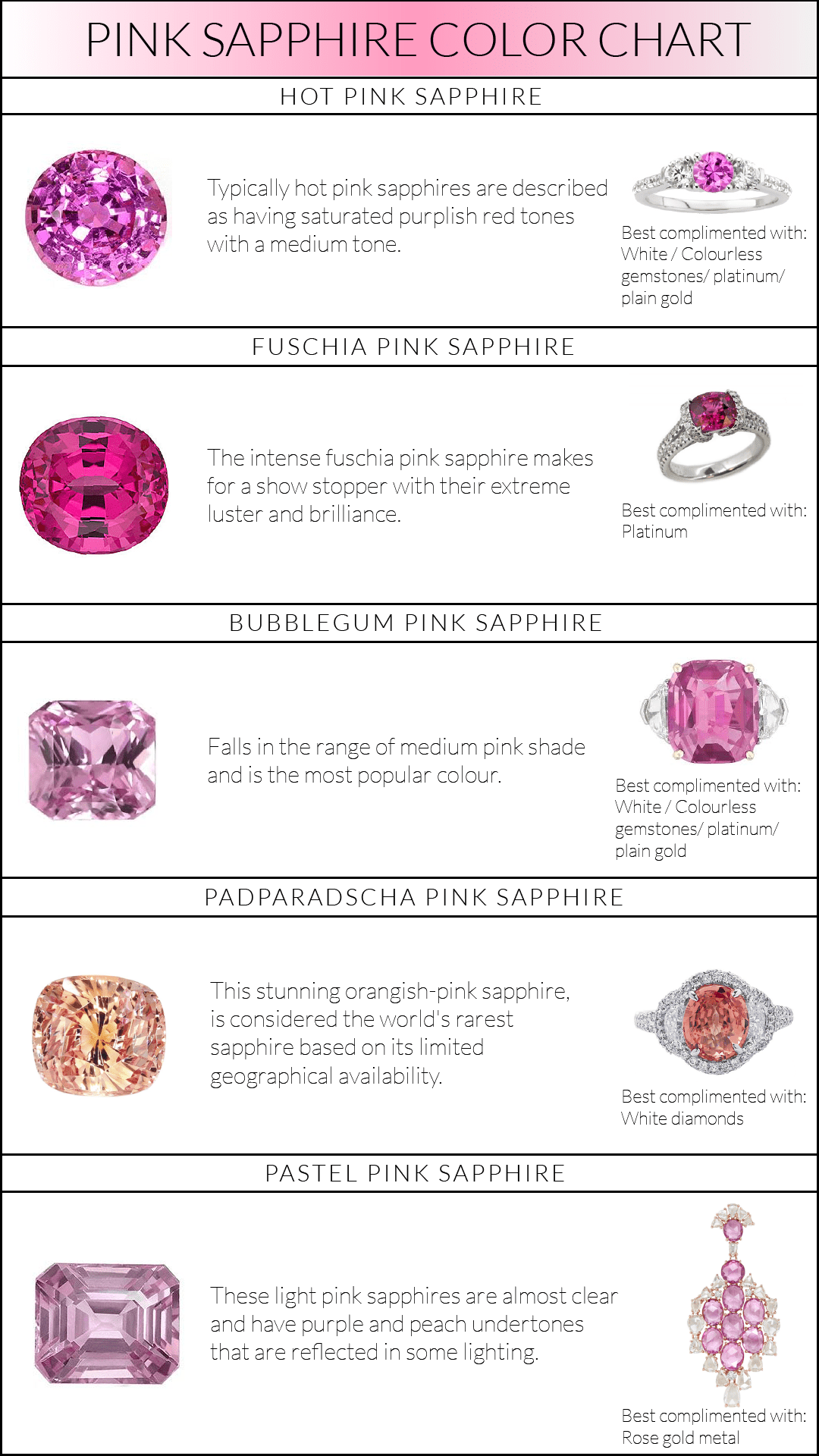 The bright and effervescent hot pink sapphires have been the talk of the last decade, with more and more celebrities incorporating it in their statement pieces. Typically hot pink sapphires are described as having saturated purplish red tones with a medium tone. 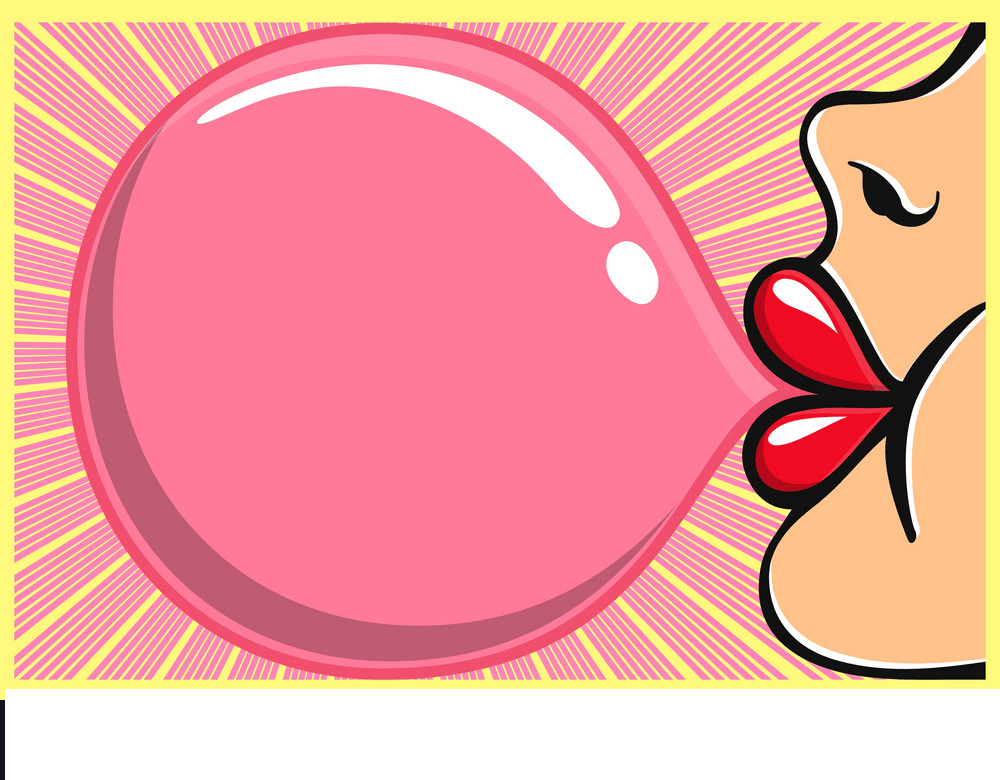 This fun color is classified as a medium pink sapphire. It derives its name from the eye-catching color of the classic pink bubblegum and is very popular in Asian and South-East Asian markets. Available in several cuts, like ovals, pearls, cabochons, and cushions, bubblegum pink sapphires are the most popular color of pink sapphires. 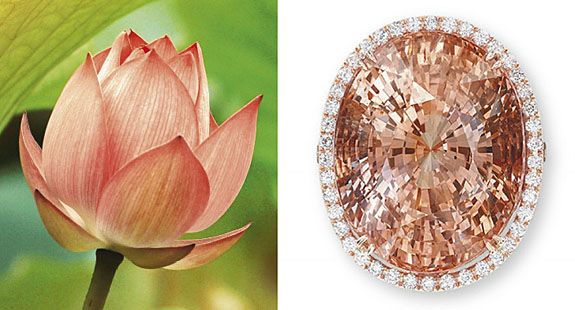 Pastel pink sapphires make up for the lightest hue of the pink sapphire spectrum. These light pink sapphires have purplish and peaches undertones that are reflected in some lighting. Ideal as the center jewel for stand-out pieces like sapphire engagement rings or sapphire neckpieces, this demure shade is perfect for a subtle and elegant look.

One of the most important factors to be considered while selecting any gemstone is the cut of it. The cut determines the amount of reflectance of the stone, depending on which it would show purple or orange undertones in certain lights. White sapphires don’t have an ideal cut like diamonds, a good gemstone cutter will maximize the individual sapphire’s unique combination of clarity, color, and brilliance.

While the most popular cut remains the diamond cut pink sapphires, they are also popular in ovals and pears for wholesale purposes. Other shapes that can be made on-demand are emerald, long and square cushions, hearts, and rounds. The cut in every case is dependent on the gemstone cutter’s skill and the stone’s inherent color properties.

CLARITY OF THE STONE:

Sapphires are generally evaluated by the naked eye for inclusions. The cleaner the stone is to the eye, the higher the price. However, it should be cautioned that sapphires naturally have rutile and silk needle inclusions and an excessively clean stone should be evaluated for treatment or imitation. A good quality natural pink sapphire generally falls in the VS (Very Slightly included) or VVS (Very Very Slightly Included) grade on the GIA clarity grade scale.

CARAT OF THE STONE:

Pink sapphires are still a rare luxury and are not available in large carat sizes. The most common cuts are diamond cut wholesale pink sapphires of about 1mm in diameter. We undertake orders starting from this size up to 9*7 ovals and pears of 2 carats. The next popular carat sizes in calibrated stones are as follows:

Uncalibrated or free pink sapphire stones are available with us from 1 to 3 carats. Above 7*5, uncalibrated stones cannot be put into mass production and are strictly restricted to exclusive boutiques with designer customer needs.

While international bodies like the Gemological Institute of America and the International Gem Society continue to debate the difference between these stones, the choice lies completely on the customer and his individual preference.

7. Price and Purchase of Pink Sapphires:

While buying pink sapphires is a much less daunting task than buying diamonds, buying from a source that has had a long-standing history of trading in them is advisable. At Navneet Gems and Minerals, we supply our patrons with high-quality photos before purchase to adequately evaluate the hue, saturation, and clarity of the stones. The price of pink sapphires varies according to cut, color, and origins. At Navneet Gems and minerals we supply diamond cut pink sapphires beginning at a range of 10$ a carat to 60$ a carat.

For more details on the availability of different cuts of wholesale pink sapphires, their prices, and photographs, do contact us. We’d love to hear from you. 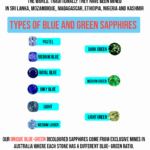 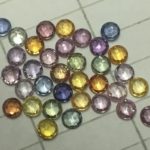