Ever wondered how Blue Topaz was actually treated, and which machines are used in our Labs? Well, here we disclose our techniques and methods in brief.

Topaz is most frequently treated by irradiation from Reactors, Cobalt 60 irradiators, and Electron Accelerators, which are technical machines requiring a lot of technical subjects.

Electron irradiation from high-energy electron accelerators is today the most widely used process for coloration of Sky blue and Swiss blue topaz.  The advantage over gamma irradiation is mainly the high dose rate, which allows the treatment to be carried out in a very short time.

Neutron irradiation makes the topaz radioactive and in need of a cool-off time (from a few months to years) before they can be released for further processing such as electron treatment, annealing, cutting, or polishing.

Gemstones are those stones that have a beauty that can be based on their color, transparency, brilliance, and crystalline perfection. Topaz is used mainly as a gemstone, It is the most common irradiated gem on the market. High energy such as neutrons has enough energy to produce color centers. Irradiation is most often carried out in nuclear reactors (high-energy neutrons). Irradiation of topaz in the Egyptian research reactor (ETRR-2) by neutrons changes its cloudy white color to a reddish-pink which could be changed to blue by heating. 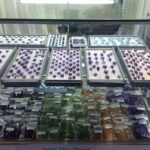 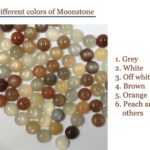 Next Post Supplier Of White Moonstone At Wholesale Prices