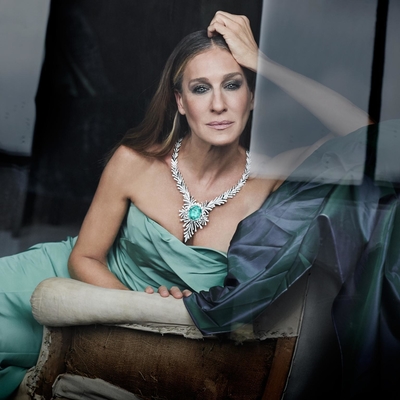 What You Should Know About The Gemstone Colour Of 2022.

For global tastemakers, fashion buyers and curators, Pantone’s colour of the year is one the most reliable yardsticks. Since 2000, Pantone trends every December as The Pantone Color Institute announces their pick for colour of the year. This year the hashtag #veryperi dominated our Instagram feed as Pantone announced this fascinating purplish-blue as its colour of the year. But there’s a lot more to this trend than hashtags and Instagram reels because the trend has inspired major jewellery trends in the commercial circuit.

For the past 21 years, Pantone has been identifying one colour based on design trends and this pick seeps into almost every creative field, be it fashion, luxury, architecture, art or even the industrial circuit.

“We will ask what is happening in socio-economic terms in the world to make sure that we pay attention to what the public at large is telling us, what their needs are, what their hopes are. With that information gathering, we can do our homework and come up with an intelligent analysis that enables us to decide on the colour,” said Leatrice Eiseman, the executive director of the Pantone Color Institute.

In a way, the Pantone Colour Of The Year helps industries gauge what works visually and works as a forecast for global culture. But for the very first time, the company introduced its first-ever, digitally-created colour of the year. The futuristic and warm Very Peri has been described as a dynamic periwinkle blue with a distinct violet-red undertone. In 2020, Pantone chose the Classic Blue as its colour of the year and in 2018, a blue-based purple was selected. Whether Pantone is bending two hues together or picking one existing shade, it has often stemmed from the blue family.

Experts have suggested that this pattern showcases a demand for this colour among mainstream buyers. In the coloured stone trade or wholesale gemstones market, blue has traditionally always been in demand, but the trend-driven publicity is only helping this design trend garner more traction.

What this means for jewellery?

Trend reports suggest that the commercial popularity of the eclectic, complex, notes of blue-coloured gemstones has grown exponentially in the last two decades. Even in high jewellery, dressy, cheerful baubles featuring colourful gemstones are in demand, especially in the post-pandemic market. Be it in holiday jewellery or in the bridal circuit, tanzanite, spinel, lavender jade, purple and teal sapphires, tourmalines and parti sapphires etc are trending big since they resemble the sophisticated red-purple-infused blue of Very Peri and fit in seamlessly in the luxury memo.

Parti sapphires or dichroic tourmalines are the most coveted gems in the luxury market space in 2022. In fact, the entire teal catalogue is experiencing a surge in sales, because the profile doesn’t just stand out, it also does wonders for statement pieces.

Next Best Thing: The Types Of Teal Gems

For centuries, sapphires have been the choice of royalty, especially as wedding jewellery, be it for Nizam of Hyderabad, the Queen Marie of Romania sapphire or Princess Diana’s famous sapphire engagement ring. Sapphire is part of the Corundum mineral family and has a hardness of 9 on the Mohs scale, which means they are durable and the ideal gemstone for engagement rings. Teal sapphires are dark cyan coloured sapphires, with gradients of blue and green shades and for many, they represent the majesty of oceans and forests. The coming together of more than one colour is widely deemed by experts as the next big trend in the sapphire market.

Teal derives its terminology from the Eurasian winged duck, which has a striking blue-green stripe on its head. Teal sapphires display a varying gradient of ocean blue and vivid green.

Unique blue-green, bicoloured sapphires are popularly found in Australia where each stone has a different blue-green ratio. Sapphire mining in Australia is governed by strong legislation which makes it a leader in the ethical sapphire market, which is how the Australian teal sapphire emerged as one of the biggest trends. Buyers who are keen on buying modern heirlooms that will last them years also want responsibly-mined gemstones since they’re looking to pass them on to the next generation.

Tourmalines in bright and muted colours are perfect for those who like bicolour and tricolour gems that are cut to show both colours. When it comes to tourmalines, the quality of the cut can make a big difference in its brilliance. Bi-coloured and multicoloured crystals are the most sought-after and some forms of tourmaline are dichroic, they change colour when viewed from different directions.

Brown-Taher also shared that she has been on a year-long hunt for the perfect cabochon paraiba tourmaline. The prized blue gemstone boasts exclusive neon blue colours with strong saturation and medium tone.

Navneet Gems has been making and trading Paraiba tourmaline from the source in Africa since Paraiba from Brazil is almost rare. Most Paraiba Tourmalines have eye-visible inclusions and don’t come clean. When it comes to Paraiba gemstones, colour is more significant to buyers than clarity and cut since the most brilliant cut fetches the maximum value.

Apatite’s sparkling tonality resembles the bright medium robin egg blue shade, which is commonly known as Tiffany Blue. Both Tiffany Blue and apatite share an almost aquatic coolness. Blue apatites and ‘neon blue-green’ variants are the most commonly available apatites and also resemble the Paraíba tourmalines when it comes to icy brilliancy.

Navneet Gems which is one of the biggest wholesale suppliers of gemstones offers a large variety of blue-ish gemstones sourced from around the world, be it Amethyst, Andalusite, Jade, Jasper, Lapis Lazuli, Tourmaline, Apatite etc. Apatite can be an interesting gemstone for people natural pieces that aren’t perfect, because it exhibits a range of interesting inclusions of other minerals, including hematite and tourmaline. One of the most audacious pieces of apatite jewellery is Sophia Forero’s Aphrodite’s Sea, which was recently featured in The New York Times and displays the varying gradients of cool, icy blues.

The relevance of Padparadscha

Buying a blue sapphire is a lot less technical than buying a diamond because when it comes to sapphires, colour matters more than clarity. Traditionally, blue sapphires are the most expensive. The closer you can get to ‘true’ blue, the more prized a sapphire will be, because the name sapphire is derived from the Latin term ‘saphirus’ and the Greek word ‘sapheiros, both of which means blue. According to The International Gem Society (IGS) the most expensive sapphires reach vivid saturation.

The American Gem Society confirms that while typical blue sapphires get their colour from the addition of titanium and iron to the mineral corundum, padparadscha sapphires are corundum with trace elements of chromium and iron.

Its rarity makes Padparadscha a collector’s gemstone, prized corundum, balancing on the gradient between pink and orange. Their value increases as the saturation increases, and they have their own individual colour zoning with some displaying paler mediums of pink and orange and while some colour zoned with yellow. Besides the obvious colour difference, it’s warmness of a Padparadscha which makes it so different from the cool, icy tones of traditional teal sapphires.

The emergence of teal sapphires and gemstones in the purple-blue catalogue has opened up discussions in the collector’s circuit, pertaining to the most sought-after gemstone. Australian teal sapphires are one of the most popular picks in the wedding jewellery circuit, particularly as engagement rings as younger buyers covet ethically-sourced pieces, which are aplenty in the Australian supply chain. Moreover, their hardness makes them safe options for wedding or engagement rings since they are meant to last someone a lifetime.

If you’re torn between a Paraíba tourmaline, mermaid sapphire (the most coveted teal sapphire), it’s important to note that the Paraiba has a less saturated colour than mermaid sapphire, which possesses an intense tonality, 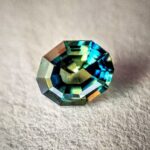 Previous Post The Future Of Ethical Gems: The Ultimate Primer On Ethically Sourced Sapphires From Australia 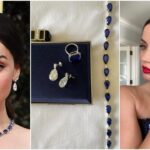