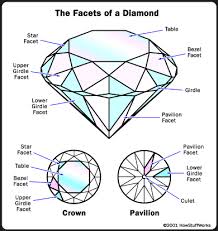 Forms and Properties of Diamond

Diamond is the best-known gem. Its history is so long and complex that the beginning is lost in antiquity. India was a source of many of the world’s most famous diamonds.

Diamonds were traded in India as early as four centuries before the birth of Christ, many gems reaching Ceylon (now Sri Lanka) and the Middle East. Other stones found their way into the Roman Empire, where their supposed magical powers enhanced their value. Arabian and Persian merchants brought diamonds to China, where they served as jade-cutting and pearl-drilling tools in the first few centuries A.D. Diamond tools were highly regarded in Chiba and were considered gifts worthy of royalty.

Indian superstitions about diamond eventually spread throughout the world. The Buddhists believed that a person’s soul had to be purified before joining the ‘’universal soul’’ or karma. The steps in this process involved incarnations as animals, plants, and even minerals. The for-tered the belief that minerals and gems have life, a notion that persisted for centuries. The Greek philosopher Plato believed in life among gems and rated diamond as the noblest. Such ideas were held well into the stones as “precious,” believed that minerals and gems were “born” of the fluids in rock cavities.

Diamond, with its remarkable properties of hardness, dispersion, and brilliancy, was also considered a strong medicine. The powder of white, flawless diamonds would, if swallowed, impart health, energy, and long life. Flawed stones, however, might have the opposite effect! Diamond powder was for centuries considered to be a deadly poison, and the deaths of many prominent rulers and politicians were attributed to this agent. Diamond was supposed to have many other mystical powers. If held in the mouth, a diamond would cause the teeth to fall out. It repelled phantoms and demons, and prevented nightmares. Diamonds could ward off magic and protect the wearer in battle by giving him courage, virtue, and invincibility.

Fabulous diamonds symbolized wealth and power. They were regarded as emblems of rank and status. In times of political upheaval and uncertainty, diamonds also represented easily portable wealth. The history of diamond constantly links together attributes of power, magic, and great value. The incredible beliefs about this gem have been embellished through the centuries. But they are undoubtedly derived from the truly remarkable properties that diamond does display. 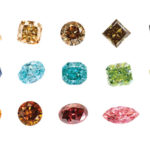 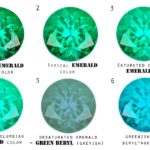