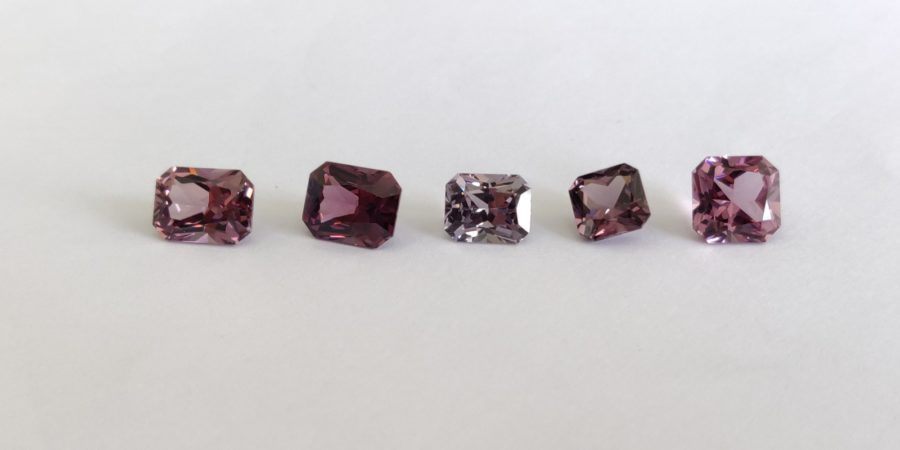 A questionable reputation, a covert history and a return to the gemstone market to be placed along with the most precious of gemstones make spinels the legit prodigal son of the gemstone market. Having been confused with rubies and sapphires for centuries, these are coming onto their own today. So let us get acquainted with the next big stone of the 21st century. 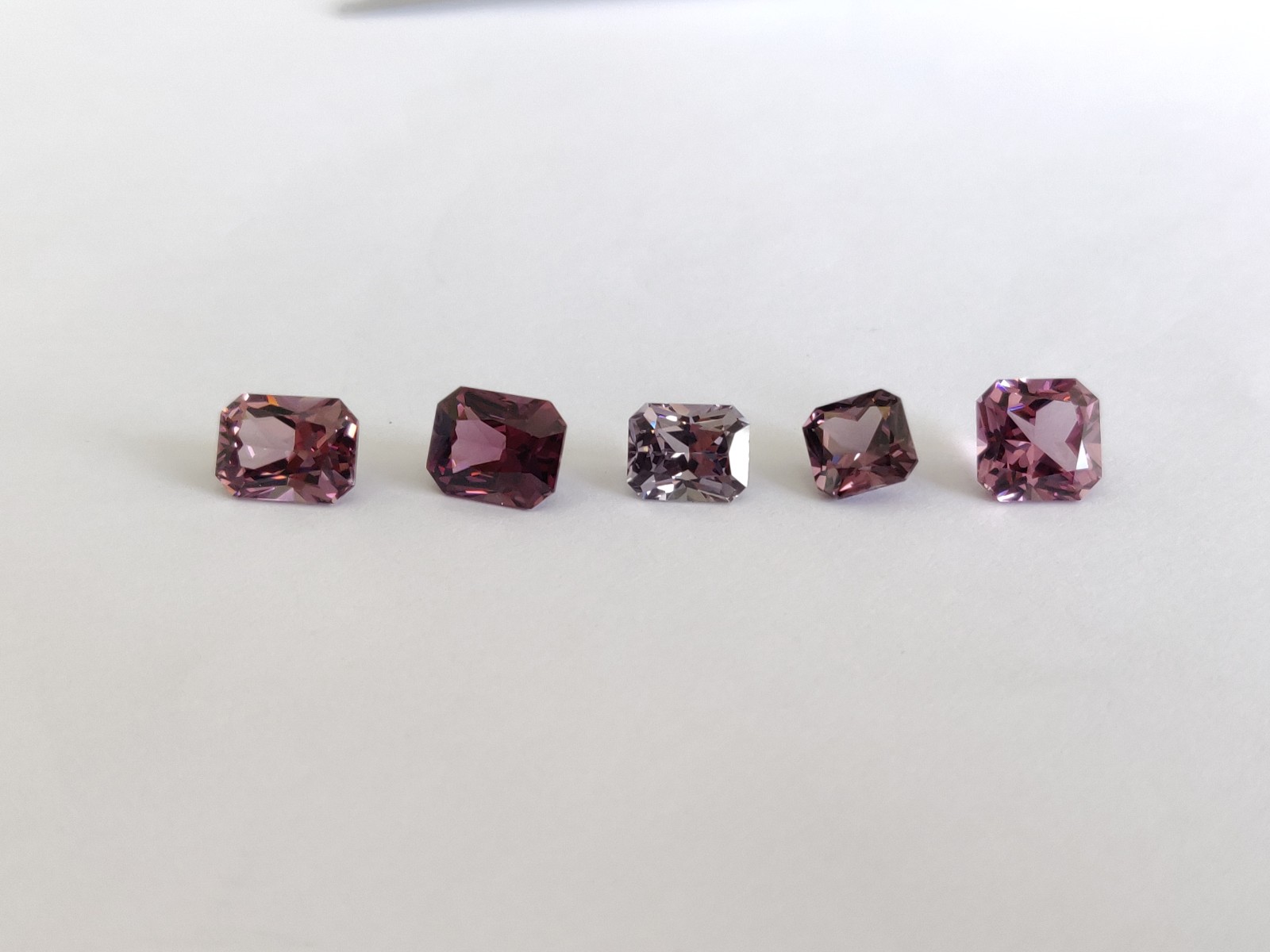 So what is a spinel?

In geology, spinels are used as a broad coverage term for minerals with the chemical formula of XY2 O4, where X could be Mg, Fe2+, Zn, Mn2+, Ni, Cu, or Co. Y stands for Al Fe3+, Cr, V3+, Ti4+, Ge or Sb. Chemically speaking gemologically valuable spinels need to have the composition MgAl2O4  while other spinel group minerals are magnetite, franklinite, chromite, chrysoberyl, and columbite-tantalite.

Since spinels are found in close association with rubies and sapphires and have a similar composition, save for the magnesium in spinels, these two groups of minerals were confused for each other for a very long time. However, there are a few compositional differences between the two, the chief amongst which is the hardness on the Moh scale. While corundum gemstones like rubies and sapphires are extremely hard, second only to diamonds, spinels are a pretty tough group too with 7.5 to 8 on the Moh scale.

Another major difference is that while gemstones of the corundum group are frequently treated to enhance their color, spinels have a natural fire and brilliance due to their high refractive index. This makes treating spinels quite unnecessary.

Diagnostically, the difference between spinels and corundum is as follows:

The Covert History of Spinels:

Spinels have been used by ancient cultures as is evident by the artifacts found in Buddhist tombs in Kabul which are as old as 100 BC. In fact, apart from red spinels used by the Romans as early as the first century, green and blue spinels were introduced by the Romans in England during their occupation back in 51 BC. Marco Polo documented the first systematic mining of spinels in and around Afghanistan between 750 to 950 AD. Apart from these, historically they were mined in the Mogok region of Myanmar and Tajikistan. Relatively poster deposits have been found in Vietnam and Tanzania.

Due to the lack of serious marketing, spinels have never enjoyed the cult status of their corundum cousins. While the miners in Myanmar had distinguished spinels back in the 1500s it took Europe the second half of the 18th century to mark the differences between spinels and rubies and sapphires. This is why there is a marked lack of spinels in jewelry from the Georgian period onwards.

However, many iconic jewelry pieces had already been embedded with stunning spinels that were mistaken for rubies or sapphires. Some of the most mistaken legendary stones are as follows: 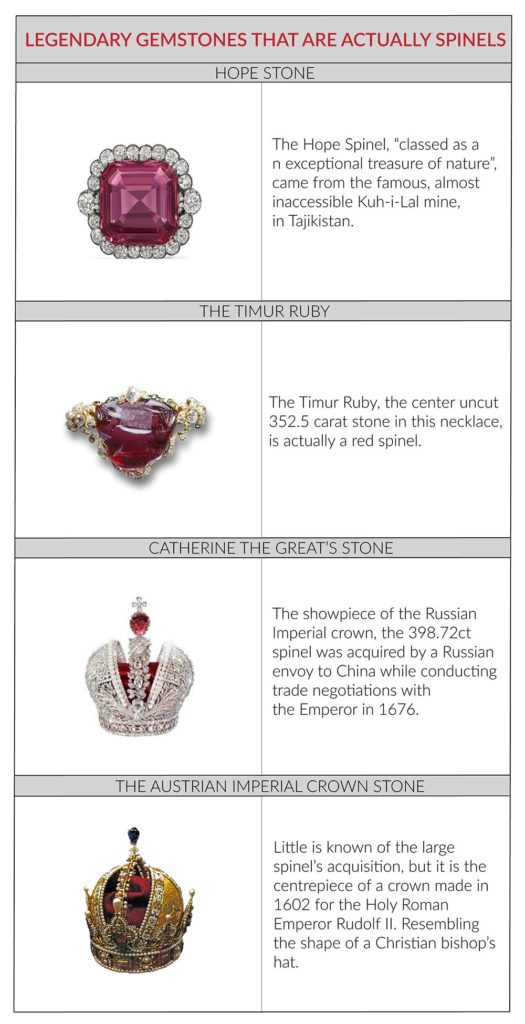 Spinels saw a comeback in the 1980s when there was a demand for bright, big stones. 2019 saw spinels being displayed along with rubies, emeralds, and diamonds at major auctions and exhibitions. The prejudice is definitely ebbing away and the tide is here to change.

Spinels were not an original feature on the 1912 list of birthstones as mandated by the National Association of Jewelers. However in July 2016, the Jewelers of America (the erstwhile National Association of Jewelers, included spinels as the August birthstone list along with peridot. This gave spinels a huge boost in popularity since spinels provided consumers with a lot more variety than the singular yellowish-green of peridot.

The Controversy of Spinels:

Spinels have been around for as long as mankind has known about rubies and sapphires. In fact, the first synthetic spinel was produced in 1847 by a French chemist called Jacques Joseph Edelman. However, the commercial production of spinel was not perfected until the 1930’s when these “synthetic spinels” were used to imitate popular gemstones like aquamarine, zircon, ruby, tourmaline, and more. Thus, when the world was first getting acquainted with spinels, they came across poor-quality synthetic stones that were being passed off as spinels. This notion has taken firm roots and old-schoolers still distrust gemstones that are termed as spinels.

Why invest in spinels RIGHT NOW:

Most jewelers and gemstone collectors today understand the deep, understated value of the spinel. The biggest testament to the merit of this gemstone is that for years it has reigned on the crowns and closets of royalties for being considered perfect. For those requiring more convincing, here is why jewelers, gemstone wholesalers, and retailers need to invest in spinel gemstones right now.

Just like their cousins, the sapphires, spinels present in a wide range of colors, with the ruby-like blood red and sapphire-like cornflower blue being just two popular varieties of it. From soft pastels to steely, almost metallic hues, spinels literally have it all. These days, the most popular tones of spinels are greys and pastel spinels.

While spinels have always been found in association with rubies and sapphires, the discovery of mines in Tanzania which yield an exceptional quality of spinel has reposted the interest in them. With more and more experts realizing the inherent value of the gemstones, it isn’t surprising that they are actively advocating it as an heirloom gemstone, perfect for symbolic jewelry like engagement rings.

Since spinels do not enjoy the empirical attention that is given to rubies and sapphires, they are priced affordably. For example, while a ruby may as well go up to 40000 USD, a spinel of similar size and quality would be priced around 7000 USD. This makes this stunning gemstone available to a younger, less affluent crowd.

However, it should be kept in mind that with a reposted interest in the merits of spinels, the prices have steadily increased over the years and will continue to do so, according to experts. We, therefore, urge our readers to jump onto this trend as soon as possible.

Today’s customer wants to make an informed purchase. They aren’t just content with the seller’s validation of his products and will do their own thorough research to get value for his money. Therefore, there is an increased emphasis on natural stones. With natural mines of high-quality corundum being depleted, most rubies and sapphires are subjected to some form of treatment to remove their inclusions and improve their color. In stark contrast, spinels are naturally more clear and are thus left untreated. This also makes spinels easier to trace, making ethical sourcing another positive factor in its favor. So when it comes to picking between treated corundum and an untreated spinel, ALWAYS, pick the latter.

Spinels are hard and lustrous and require the minimum amount of effort in maintenance. While they are sensitive to heat and the color may fade, they are relatively stable against chemicals and light. Combined with their high hardness, they make the perfect candidates for everyday jewelry like wedding rings as they do not scratch from rough use unless they come in contact with materials harder than them like diamonds, rubies, and sapphires.

While spinels are much less rare than rubies and sapphires of top-grade quality, they are also not available in overabundances like amethyst and quartz, making them a relatively rare gemstone. This makes it great as statement jewelry like an engagement ring.

Spinels have just begun to emerge from the shadow of their famous siblings and have created a niche for themselves. Their natural beauty, their steady increase in popularity and respect amongst gemstone aficionados is a clear indication of the proportional increase in value spinels might experience shortly.
Our take-home message is that when in doubt over a ruby or sapphire and spinel of similar quality unless proven to be 100% natural, untreated, and ethically sourced, go for a spinel with your eyes closed. 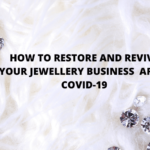 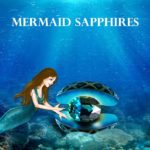 Next Post Mermaid Sapphires: Teal Sapphires At Their Very Best